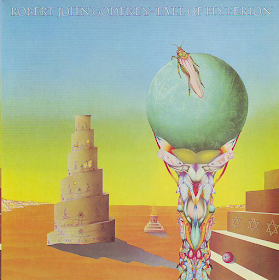 After (well I don’t want to get into the crossfire with this) creative and tensional differences with Barclay James Harvest with Once Again in 1971, Robert John Godfrey decided to take his symphonic and orchestral approach towards story-complex music and decided to release his own solo album. Originally released in 1974, Fall of Hyperion was a powerful and obscure gem that Godfrey wanted to take his classical sounds into a world of beloved dreams and showcased his keyboard and compositions with a Tchaikovsky-like rock opera.

Pomp and Circumstance, exploding rhythms, and wonderful singing (from the mind and lyrics of Christopher Lewis whose voice will remind listeners of the lost legend from the psychedelic pop world, John Howard), is the full evidence. This is obscure symphonic prog that would have given Yes a field day and yet there’s a bit of could have been the sequel to Atom Heart Mother and A Question of Balance. Now is Robert John Godfrey one of the explosive keyboard players ever? No, but what he does is to take the listener on a journey into a world of beauty and dramatic structures for the ballet that would have their knees tired after dancing to different time changes.

There’s the full on operatic roar introduction of the mellotron and piano concertos on The Raven in which Lewis pay an homage to Edgar Allen Poe and a small node to Hawkwind (The hawkwinds are silenced) while the romp turned militant clash of the drums on the edge of danger of Mountains, shows that Godfrey is no fluke when it comes to orchestral rock. The lushful turned pastoral emotional touch of Water Song, could have been used in Disney’s Fantasia (From the Night, Morning bright/Sunrise to a Clear Blue Sky/So warm the land around/Go endlessly, go rolling on to sundown), is spot on touching and dangerous.

Isault is another rumbling turned volcanic eruption as Lewis’ voice will take your breath away as Godfrey’s keyboard follow his voice as he takes his story-structured songs into another level into the soaring sky into the heavens, and you can tell that they lyrics have a bit of his touch and tribute to Pete Sinfield’s earlier days with King Crimson. There’s a bit of a reminiscent of Michael Powell’s The Red Shoes in the lyrics as Godfrey hits it hard while giving a small sense of boundaries throughout the number like a knife cutting through the tightrope and holding for dear life.

Now if Isault was soft and calm, the 14-minute finale, The Daemon of the World, that is his homage to Pink Floyd’s A Saucerful of Secrets, is one of the eruptive pieces that would have replaced The Sorcerer’s Apprentice and have Mickey Mouse use his magical powers for the brooms to dance to. There’s some tension structures, post-apocalyptic dooming percussion music, avant-garde balladry, angry voices, keyboard magical adventures of swirling, you get the general idea. When you listen to this piece, you get the feeling that Godfrey is writing his own version of Fantasia and giving Mickey Mouse a sheet to say, “This is how we’re going to do it. And we’re going to do it my way.”

Fall of Hyperion is not an easy album to listen to from start to finish, but Godfrey always wanted to push the envelope with wild experimentation that he wanted to go far from the solo album to the formation of The Enid. With Fall of Hyperion, he decided to give the temperature level a huge voltage of peaking at 100 and seeing where the symphonic structures will take him and he is the man who knows how the job is done and how it needs to be done.
znathanson at 11:04 PM
Share