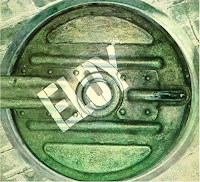 Originally released in 1971, Eloy’s self-titled debut album was an interesting surprising, psychedelic crazed musical statement, but when you look back on it, it could have been recorded in outer space and on a spaceship heading for the solar system by jamming non stop, a cool idea to get your head bogged into the groove. Lead by guitarist Frank Bornemann, who is now the only member left in the Eloy line-up and now is a producer and engineer in his hometown in Germany, and engineer Conny Plank who’s famous for working with the Krautrock kings of; NEU!, Guru Guru, Kraftwerk, Can, and the heavy metal-gods of the Scorpions, and engineered their only debut album, it is the sound of Space Hard Rock with virtuosity Hawkwind meets Deep Purple stylistic complexity. With the start of a guitar going insane with a bumping and feedback going off the roof, Today comes at you with its homage to Mark I of the Rod Evans-era of the Deep Purple-era and then it goes into a punk experimental mode as drums and the scatting vocals which seems similar to Purple’s hit single Hush, Bornemann’s heavy guitar licks is kicked in with the shuffling and Blackmore style while lead vocalist and keyboardist Erich Schriever delivers a punching vocal lines including a scatting peak of magnificent proportions, but in retrospect, it sounds very odd to put it in there.
But with the heavy rhythm section on Something Yellow, it almost reminded me of a german version of Black Sabbath with its militant bridge section and then going back into the sinister wah-wah frenzy that makes it so goddamn brilliant and then going for the Adagio by going really fast in the beat measure as it heads back into the blues metallic section to close it up with a heavy drum solo and then adding some guitar lick to the core while the title track of Eloy has a mixture of mind-heavy rock and then adding the congas to give it a tension spree as it heads back into the sci-fi lyrical contents. Song of a Paranoid Soldier which is almost an anti-war song dedicated to the War in Vietnam tells the story through the mind of a soldier who is a democrat and coming home to his family instead of killing innocent civilians in this Floyd meets Stooges meets King Crimson relative number that would have given the hippies the middle finger and Voice of Revolution has the same subject value about peace and freedom in the punk-mode style representing The MC5 techniques and for social injustice.
And if that wasn’t enough of Eloy’s music, the last two numbers is where it gets cooking. The atmospheric eerie composition Isle of Sun, which features organ and piano doing some spooky solos while it deals with figuring out the way to stop the murderous killing is to find an island in the german isles and look for a new beginning and look for the foundations they have in the hearts and minds of their own thoughts and their hopes for a brand new day while Dillus Roady is a tribute to their roadie simply named Dillus, who is an obsessive heavy music fan and helps Eloy equipment, get them drinks and heads them home in this humorotic twisted blues number dedicated to him. Also, I forgot to mention the bonus tracks in the new reissue released on the Repertoire label which are only three tracks released as singles. Walk Alone is a dark melodic turned arpeggio Sabbath rocker as Daybreak which has a shuffling chug about who you are and looking for a job in the daytime while Vibrations of my Mind is hard metal like no other with a Jethro Tull sound quality to the mix ala Cream meets Zeppelin blues rocker.
Through various line-ups, Eloy are still going strong, and kick some sci-fi ass along with the floyd. A debut album paying homage to Black Sabbath and Deep Purple? Cool!
znathanson at 10:27 PM
Share