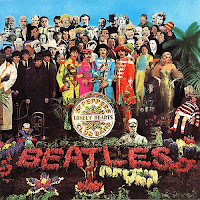 Here is an early sneak preview of the remastered edition of the Beatles 1967 landmark album, Sgt. Pepper’s Lonely Hearts Club Band. After they stopped touring in 1966 with their final performance in San Francisco at Candlestick Park, they realized that they weren’t just entertainers, but more of artistic boundaries and like singer-songwriters. Some felt that Beatlemania was over and gone for good. “Well it took five months to record (Sgt. Pepper)” Paul McCartney mentioned in an early interview “I remember reading in one of the papers saying ‘oh the beatles have dried up,’ and I was rubbing my hands saying ‘you just wait’. Thus, Sgt. Pepper was born and this is where the Beatles really experimented at the Abbey Road studios, doing unbelievable compositions and going beyond the ride of marmalade skies. It’s impossible to talk about Sgt. Pepper: a psychedelic ‘60s retrospect and remained a mind-boggling adventure. But when you look back on it with its roots of Progressive Rock and moving away from the stadiums, it still sometimes obscure, fun, and amazing songs that you would sometimes sing to your children or have a puff while you get stoned listen to it from beginning to end for the first time.
Some felt that Sgt. Pepper is an overrated album, well it isn’t, but you get the opening rockin’ suite is one of the powerful tracks, featuring McCartney surprising vocal arrangements and Harrison’s orientated guitar riff. The title track and the psych-pop sing-along number featuring Ringo’s vocals on With a Little Help from my Friends that features a bass line which is has a jazzy riff that couldn’t be let go of while Lucy in the Sky with Diamonds and Getting Better features dream-like space quality and having a bad luck in school and beating up woman and feeling not cool with it from the chorus that has like nothing you’ve ever heard of. Even though the album is a classic, it is also strange from time to time.
The twisted circusque rocker with a weird synth based on an 1840’s poster which Lennon found on Being for the Benefit of Mr. Kite! the eerie Indian sitar droning atmosphere which Harrison does beautifully well on Within You, Without You while the symphonic horn section goes extremely loud on Good Morning, Good Morning and the crispy psych-folk based on a groupie with Lovely Rita. However, there are some beautiful tracks that would make you feel emotional.
The classical rocker of a young daughter leaving their parents behind and moving on to a new life with She’s Leaving Home and the 1930’s homage which Paul would do on the White album on the jazz bass line on When I’m Sixty-Four, the harpsichord ballad of the rain leaving marks in the house and fixing it up where it won’t come in with Fixing A Hole which seems very Baroque and Pet Sound-like quality. And then the climatical climax of the true story from different newspapers of holes in the wall, car crashes, blowing a mind at the same time with A Day in the Life which is an odd and bombastic number, with Lennon’s ghost-like vocal arrangements and haunting guitar chords while Paul is singing about coming to work very early in the morning and then finishing up with a sinister orchestral finale like you’ve never heard of before.
znathanson at 5:31 PM
Share