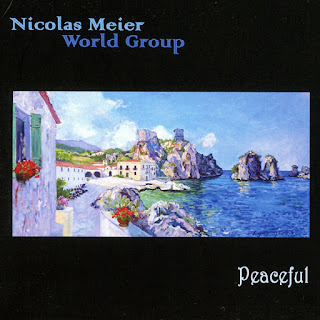 The music of Nicolas Meier’s guitar playing has never let me down. My introduction to him was four years ago with the releases of his collaboration with Pete Oxley on Chasing Tales and Infinity. Now we are here in the latter part of 2019. Nicolas is full swing with the release of his new album called, Peaceful. He has his own World Group that features bassist Kevin Glasgow, violinist Richard Jones, and percussionist Demi Garcia.

Released on the MGP label and distributed by MoonJune Records, Peaceful gives Meier an opportunity to go beyond the genre of Flamenco music. He and the World Group takes you to the heart of the sound throughout the different guitars that he plays on the album.

And it isn’t just the journey that he takes you to, but going through the outskirts into the European countryside across the sea with some middle-eastern textures. The percussions that Demi does on here, gives some aspects of the romantic side of the Tango while Richard’s violin gives Nicolas a chance to pull the handles of going back to those wonderous landscapes with some melodic textures that they would do together.

What I love about this album is that how the group have this amazing chemistry together and they would bring these delicious ingredients they brought from the grocery store and cook up a delicious meal together. Not only that, but they would bring up these structures to add more of these intensity levels to increase the challenge even more.

The music can make those challenging dances by tackling the traditional styles between the hearts of both Mexico and Brazil with some unexpected twists and turns. And with Peaceful, it can really capture you to see and hear on what not just the world group would do, but what would Nicolas Meier think of next.

Posted by znathanson at 8:41 PM