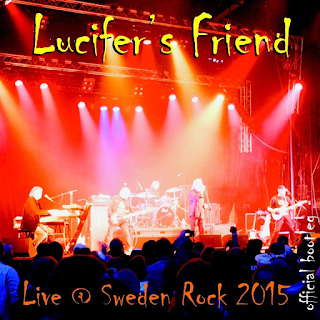 Last year, this blogger just received a mind-blowing eruptive wake-up call by delving into the sounds of a overlooked band who have been around in the ‘70s called Lucifer’s Friend. Now, I’m very new to the band’s music. And when I heard their 2-CD set of Awakening that I received in the mail by Glass Onyon, I was completely jaw-dropped to the floor. It was heavier, proggier, and eruptive. I can hear the sounds of Uriah Heep, Iron Maiden, and Judas Priest followed by both the AOR (Album-Orientated Rock) and the NWOBHM (New Wave of British Heavy Metal) combined into a full circle. And I was hooked right from the very beginning.

Since their reformation back in 2015, I’ve always wanted to discover what they will think of next. This live "official bootleg" was recorded at the Sweden Rock Festival on June 5th, 2015 and their first performance in over 28 years at the 4Sound Stage. Listening to this live album, you can close your eyes and just being in awe, fighting back tears, and head-banging to the sounds of pure heavy metal at its best that shows Lucifer’s Friend are bringing in the big guns for an eruptive performance that needs to be played at maximum volume.

Peter Hasslein carries the heavy riffs and lead work on his guitar that just will have your eardrums pumping until the early sighting of dawn and John Lawton himself, while at the age of 69, he can still belt out those vocals. I can imagine a young Rob Halford listening to Lucifer’s Friend and Lawton’s time with Uriah Heep, just being in awe and wanting to capture the styles of his arrangements.

This whole set includes at the time they are promoting the 2-CD set of Awakening. And it’s a real adventure to enjoy the set by knowing they are back and there is not a single stop sign for Lucifer’s Friend. The quintet deliver a massive roar for audiences to enjoy the music. Jogi Wichmann still carries the flaming torch when it comes to the keyboard and in the styles of both the late great Jon Lord and Keith Emerson. He can go heavier and classical and knowing that they have got their backs when they need him.

The booklet contains photographs from the show including meet and greets with the fans. My second and third time listening into their live performance at Sweden, shows that the energy and power is still there and it will keep the flames burning until the end of time. So I highly recommend both the 2-CD set of Awakening and this live recording at Sweden Rock 2015 so that you can head-bang forever and ever to enjoy the sound and eruptive energy of Lucifer's Friend.
Posted by znathanson at 12:28 AM

I (and a younger but very musically with-it friend) came across this band for the 1st time on the night of May 31st thru the morning of June 1st and we were blown away by their first 5 albums on YouTube. We had never even heard a single song or a mention of their name in both our existing memories. I am 55 years old, he's 38 and we just couldn't believe our ears. EVERY Rock and Metal band in HISTORY could be heard coming back at us like these guys were the fountainhead of all rock sounds! We are now LF's newest devoted fans but feel very embarrassed for not having been aware of them before. \m/O\m/