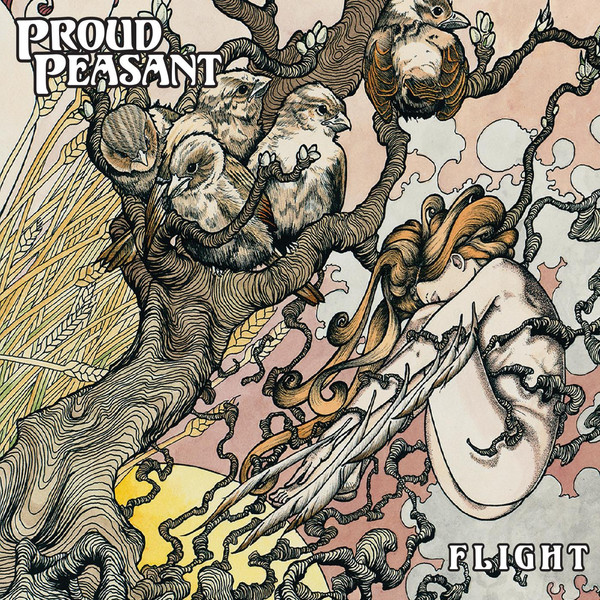 Every year, there are some up-and-coming bands that are carrying the Prog torch to the Olympic Stadium who want to stay true and making sure it’s not dead, but more of a resurrection that it’s alive and fresh. And who could carry it and how they can honor the sound and vision of the music? Playing Progressive music can be at times hard to do with difficult time changes, various movements, compositions, and stories to tell and you have a lot of practice and understanding on what the next notes are coming next.

But, this new band from Austin named Proud Peasant which is founded by Xander Rapstine three years ago, are one of the most promising bands to check out. Alongside Rapstine who performs Guitar, Mandolin, Melodica, Glockenspiel, and Percussion, the band considers; Jay Allen on Keyboards and Piano, David Hobizal on Drums, and Kyle Robarge on Bass Guitar. Their debut album, Flight, is more of a storytelling album told in an instrumental format with suites that clock in for 12, 18, and 13-minutes which gets you ready to enjoy an album filled with sounds of Renaissance, Medieval, Symphonic, and bits of Italian Prog music in the sound.

There are hints of; Mike Oldfield, Le Orme, and King Crimson to go in there and the instrumentations are astonishing and at times compelling on what the band does next in the note and where either the quarter note, eighth note, or sixteenth note will take them into. Opener, The Prisoner, begins with an acoustic folk melody for the first minute and forty-five seconds before it goes into an electrical atmosphere. It moves into an uplifting moog and guitar improvisation as it gives the sun to rise for a chance to see a glimpse of dawn breaking in while going back into the styles of Tom Newman’s Faerie Symphony-era that is unexpected for Xander to create something special as a tribute to both Oldfield and Newman as if they are watching him with approval before going into the militant styles of a Spaghetti Western score in the styles of Ennio Morricone as a finale.

Awakenings, in which it has an mourning introduction as it segues into a fast-driven rhythm guitar section before it goes into a fanfare mode and gentle soothing sound as it goes into a catchy melody between keyboard and the guitar going up and down the frets on the improvisation. And then, the vocal soloists of Brian Kremer, Jamie Moellenhoff, and Greg Smith do this wonderful touch of the Jane Relf-era of Renaissance and elements of Gentle Giant for the last four minutes as they take turns and go into a wonderful solo work on their voices as the instruments go into a higher note to meet the Jester King for a chance of relaxation.

Then, the closer, The Precipice, is where everything to starts to combine as one. The first couple of minutes is bass drum and snare along with rhythm/lead guitar, moog doing a ¾ waltz time signature (The Gauntlet) before it segues into a tender beauty of the flute on the Mellotron for a folk-like dance (Therenody for the Forlorn), then it becomes an emotional and breathtaking heavier sound in the style of Crimson.

You could tell that the band along with the musicians, and the Proud Peasant Choir, are doing a superb job on this midsection to create this dark and dystopian futuristic atmosphere. Then, the band go back into this spacey sounds that almost reminded me of Eloy at times and then it’s back into the climatic ending as they are now as one. It’s almost like an ending to a movie with everything is okay, the war is finally over and people are now starting a new beginning, a new chapter, and a new life, or being reborn to start over before ending on a disturbing note and fading out on what would happen next that leaves the listener almost on a cliffhanger as to find out what happens next.


After listening to Flight about six times now, I have to say that Proud Peasant are one of the most mind-blowing bands I’ve listened to and there’s something amazing on what will happen next for them. Who knows what the future will hold for them in Austin, but if you admire the sounds of Ennio Morricone, Tom Newman, King Crimson, and Le Orme, then Flight and Proud Peasant are worth checking out. And worth your appetite to check out.
Posted by znathanson at 9:25 PM