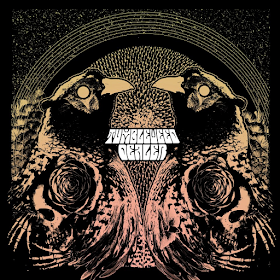 This amazing band from Montreal, have a huge dosage of Prog, Doom, and Stoner Rock as if this was recorded in 1973. For a lot of the arranging and compositions that are featured in seven pieces they have stowed upon us, Tumbleweed Dealer goes through the massive voyages of space combining the sounds of Black Sabbath, King Crimson, and Tool. And with their sole self-titled debut album released this year, it is soon going to become one of my favorite up-and-coming bands to come out in 2013.

What is really amazing about the music is just how mellowing, dark, and bluesy it sounds that they take the dosage of the three genres and add it up a notch into experimenting with various themes that some of the titles has some fantasy elements and at times like a Grindhouse film from the ‘70s that makes them wish they could have recorded a score for one of the films. Since I’ve mentioned about Tool, Sons of the Desert and The Sacred Mushroom and the Cross sounded like something straight out that was left off the sessions for 10,000 Days and Lateralus featuring a lot of swirling guitar and fuzzy bass lines with a doomy surrealism that would send shivers upon the stoner’s spine.

The doomy bass and the Hendrix-inspired guitar sounds come in like an eruptive volcano explosion on (get this title), How To Light a Joint with a Blowtorch, is a mind-boggling sound of early Proto Metal in the late ‘60s in the underground scene in Europe. The opening track, Opiates, which is a medicine of opioid alkaloids in the poppy plant, begins with a sinister riff introduction then kicks into a laid-back groove with some hypnotic vibes that goes along with it by going into higher places to set the tension vibes rumbling.

From the muddy yet crunchy hard blues rock of Trudging Through an Egyptian Swamp to the post-apocalyptic bass licks with a soothing drum beat on March of the Dead Cowboys, it feels as if they were harmonizing the sounds of High Tide’s Sea Shanties on the piece and almost writing a score to the AMC TV series, The Walking Dead. It’s very relaxing and calm on the number and dip their toes into the water for going into Spaghetti Western territory with the lines going in a psych rock vibe of an alarm siren waiting to attack.

The closing track, Dark Times A’ Comin’, evokes the sounds of the Electric Prunes,  and MKI of King Crimson and an evil version of early Deep Purple, that has this Fuzzy Garage Rock with a dramatic vibe to close the album with a calm after the storm. Tumbleweed Dealer has a long road ahead of them. And while this is their debut album, I bet there is more to where they came from in the near future. A must have for anyone who loves early Sabbath, Crimson, and the proto-prog-metal band, High Tide.
znathanson at 5:18 PM
Share