Jethro Tull's A Passion Play...The album that would skin controversy among critics and fans 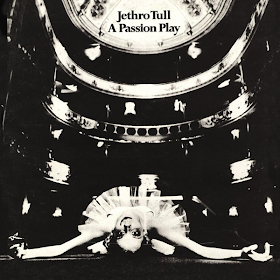 As Sid Smith and Stuart Maconie have a love of Yes infamous double album, Tales From Topographic Ocean, in which I have a soft spot for. There is also proof in the realms of Jethro Tull were pushing the concept album over the tightrope in heavy times. You can say that the concept album genre was about to piss a lot of the so-called rock critics from Rolling Stone Magazine when they released one of the most controversial albums of all time, A Passion Play.

The album is considered a cult favorite among Jethro Tull fans and even though they draw a line in the sand deciding whether they approve the album or throw it the dumpster and prefer the lovely golden-era of Tull with: This Was, Stand Up, Benefit, Aqualung, and Thick as a Brick. But for me, I enjoy A Passion Play. This was the first album that really got me into the music of Jethro Tull back in 2005.

It’s quite difficult to say this, but when the album first came out in 1973, the same year when Pink Floyd and Mike Oldfield released Dark Side of the Moon and Tubular Bells, A Passion Play was damned upon its release including Tull fan, Melody Maker and prog-fan, Chris Welch. I first came across the album when I was having my Bass Lesson with teacher Aric Nitzberg at HCC, he told me about this album and why it received so much negativity upon its release. Maybe because of the issues of religion, the cover of a dead ballet dancer crucified at the Royal Albert Hall as if it was a crime photo for investigation.

So instead of getting Aqualung, I bought the album just for the hell of it. And alongside with going into the deeper waters of avant-garde music with Zappa and Beefheart, Jethro Tull’s A Passion Play is the album that has been on my iPod nonstop. Sure it was slammed by the music critics including the infamous rumor of Tull breaking-up due to bad reviews of A Passion Play which was not true. But that’s how I loved about A Passion Play, not just the concept story line, but how the band can push the envelope a bit further close to the edge.

Like most concept albums released in the ‘70s, this album was way ahead of it’s time and benefitted how Ian Anderson was going to take all the risk and take the chances he was going to make to do this. Yet with all the controversy, I have a love of this album and admire the gatefold sleeve with the fake playbill program of the musical of A Passion Play as the band members went through an alias of different actor’s name.

Whether you admire or want to spit in the ground with it, A Passion Play is the album that took the chances of controversy, haunting court cases, and a short little tale of the hare who lost his spectacles. Now let’s hope they make a deluxe edition of this album for it’s 40th anniversary in 2013.
znathanson at 10:02 PM
Share