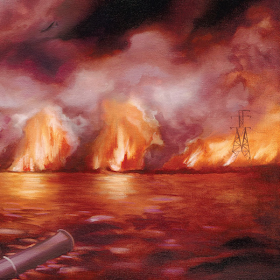 When you have a band that have a lot of sounds that follow in the footsteps of Shoegaze Rock, Baroque Pop, and Psychedelic Post-Rock, and it’s almost the soundtrack to your life in a New Age sound than it’s time to take the music and go on a magical journey. The Besnard Lakes are one of the bands that really capture the spirit of their musical influences. They have decided to push the psychedelic sound a bit forward into a combination of New Age, Atmospheric sounds, and Droning distortion up a notch almost as if they made this album as an alternate soundtrack to the drama FOX TV series, House.

They know the music and keep the similarities of the three genres upward and they’ve got one hell of an album which was released last year. The Besnard Lakes are the Roaring Night, released last year on the indie label, Jagjaguwar, it proves to show how they share this music into an eerie yet twilight zone episode that is very David Lynch like and almost a twisted yet strange adventure mixing Psych, Jazz, and Indie sounds mixed up together to the darkness. But here, they’ve got enough material to take this into the solar system and make it very much a space rock adventure. Like as if they are space cadets, they journey though the stars through various improvisation’s to get the listener going through time and space.

It’s evidential on the opening suite on Like The Ocean, Like The Innocent that starts the album off with a dream-land beauty of wonder. It goes through waves crashing the beaches as it goes through a disturbing tone on the vocals and guitar that would send a shiver down your spine. Almost as if they have landed in the year 3000 in a post-apocalyptic city of hell, the introduction piece really sends you to another scenery of time and the future while it would shows us what the world will happen after we disappear for a long, long, long time. The early Tangerine Dream and the Sigur Ros combination has really come around like an oil engine that goes 500 miles per hour, exampled on Chicago Train is a moody atmospheric yet emotional touch of life after death.

The whole piece embraces classical music and experimental touches that proves to show that the Besnard Lakes aren’t trying to rip off the Psych sounds, but to really show much they care and love their heroes in a balladry way. Albatross may be the homage to The Beach Boys Pet Sounds and Smile-era thanks to Olga Gorea’s vocals who carries the torch of Brian Wilson and her husband, Jace Lasek does those Beatle-sque harmonic background vocals to keep the ‘60s vibe going. Glass Printer has a lot of the sharp tones and thunderous rhythm section and with a crunchy guitar sound, fuzz tone bass lines, and amps going into vicious feedback while the two-part suite, Land of Living Skies is almost a surf-futuristic rock sound of the future and it’s almost a huge centerpiece on the album. The lyrics almost have a John Lennon and Paul McCartney feel and then at times it’s a psychedelic version of Radiohead throughout the haunting sections as Olga’s ghost-like voice really keeps you going for more of the their music.

Yet the homage of OK Computer comes back into the boxing ring with And This is What We Call Progress. It comes with the fierce guitar lines, thunderous drum sounds, and yet dramatic structures that covers the anger and the frustration of the Roaring Night a disturbing scenery almost as if it’s a crime scene. Light Up The Night sits somewhere between Love’s Arthur Lee and the mysticism of being alone and isolated as the closing track, The Lonely Moan carries a resemblance of Electric Light Orchestra’s Out of the Blue’s new age atmospheric underwater beauty of The Whale.

Olga comes in as the music has a synthesized calm-like storm as the thunderous rhythm guitar chord becomes a way to let everyone to take a chill pill that provides an emotional finale. While the Besnard Lakes are about to travel into the deeper waters of the futuristic baroque pop sounds, The Roaring Night is a heartfelt album for a band that embraces their discovery of the indie psychedelic crowd and almost receiving a cult status.
znathanson at 3:25 PM
Share