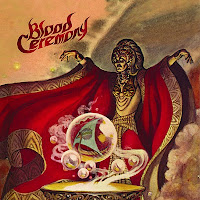 It has a heavily influenced ‘70s rock occult feel mixed with Metal and Dark Prog-Folk quality to the mix: Add the sounds of Black Sabbath, Jethro Tull, Comus, Trees, and Fairport Convention, and you got yourself a 21st century Prog-Folk-Metal element for anyone to get a huge surprise waiting for them to get their hands on. It isn’t just an album, but more of an approach for Blood Ceremony’s take of Progressive Occult Metal mixed with some dark values to the mix.
Their musical inspirations is beyond the beyond, guitarist Sean Kennedy, bassist Chris Landon, drummer Andrew Haust, and the master of vocals Alia O’Brien brings down the house in this. Taken their name from a Spanish-horror film in 1973, Ceremonia Sangrienta and formed in 2006 in their hometown in Toronto, Canada, they sure know to scare the shit out of audience from their cult following at their home base. But the album itself is by far one of the most heart-stopping albums I’ve listened to. With the doom hard rock sound, folk-metal exercise and minds that are fucked up in the torch of the early metal gods of Black Sabbath’s golden-era of the 1970s.
This isn’t just a friendly bullshit mainstream album, this is raw in your face and I don’t give a fuck album at its very best in a Dark-Prog sense. They bring the house down and dealing with elements in the Horror Film genre and what may come across the darker elements that would have gone before, but its almost an album that is perfect for a Halloween night every October to scare the little bastards with their eerie music to make them scare shitless and not give them any fucking candy. But enough of my talk about my Halloween trick or treater’s, let get straight on to the album. There are five centerpieces on the Blood Ceremony’s debut album that is spot on and right on time.
The heavy groove with Children of the Future mixed with baleful flute solos with a demonic guitar riff and solo, a groove that is very Dalek-like and becoming very upbeat in the mid section that is coming straight out of an alternate soundtrack to Dario Argento’s Profondo Rosso. More post-apocalyptic is the opening introduction HP Lovecraft-inspiration 6-minute, Master of Confusion which starts off with O’Brien’s dark organ intro as it goes into a complex chaos of the nightmare of hell. The vocals fit that scenery into the dimension with a guitar while the fuzztone sound of the bass becomes a crashing darker reflection. Hop Toad is very adante upbeat rocker which intersperses metal and quadruple waltz which has never been done before in a heavy prog metal sound throughout various prog groups who would do a quadruple doom occult waltz on a number like that, but it kicks fucking ass! Meanwhile it’s almost similar to the graveyard scenery in a pool of blood as the riffs are similar to Black Sabbath’s Evil Woman (Don’t You Play Your Games on Me) with Into the Coven as it starts off with O’Brien’s flute solo again and then becoming a witchcraft number. And the 1-minute homage to the british folk scene of the mind of Comus with A Wine of Wizardry, its very Tolkienish to say the least, but it’s a calm number as it segues to the territorial Zeppelin meets Ian Anderson style of Rare Lord.
In making to create a terrifying album, O’Brien could have become the master of medieval renaissance festivals the way it should be done in a darker way. But she and the band bring us to a standstill to those gripping moments that we’ll see in the near future with evil, darkness, and baroque, but awesome at the same time to get your blood boiling in your body.
znathanson at 10:51 PM
Share